Here we begin our journey to explore the 1908 menu for Norman E. Mack by the Iroquois Hotel, courtesy of the NYPL Menu’s.

The Norman E. Mack Menu was created and presented by the Hotel Iroquois in Buffalo, NY on February 8, 1908, and given by Mack himself to J.F. Burke and H.M Gerrans.

The Hotel Iroquois evolved from the Richmond Hotel, which burned down in 1887 due to faulty wiring systems. 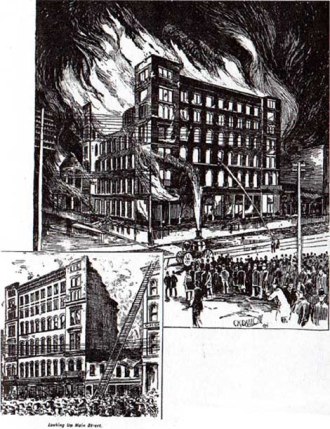 The event was one of the most horrific fires in Buffalo History, as 15 hotel employees and guests were killed while two dozen others were badly burned. After in investigation into the cause of the fire, a new hotel was rebuilt with underground wiring and fireproof tiled roof (- Illustration and text source: Victorian Buffalo by Cynthi

In 1890, the finished hotel was renamed the Hotel Iroquois. 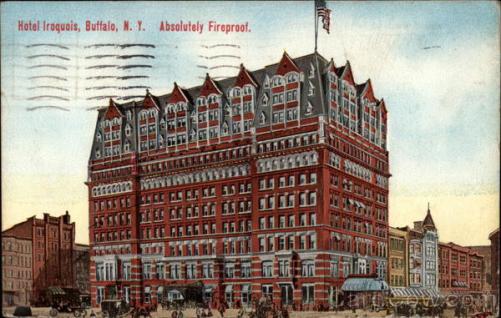 Norman E. Mack was a known journalist born in Canada in 1856. In 1874 he moved to Buffalo, NY where he gained advertising experience and eventually started his famous newspaper the Daily Times, one of the leading afternoon newspapers in the city (Biography of Norman E. Mack)

The 1908 dinner was sponsored by Mack himself and dedicated to J.F. Burke and H.M. Gerrans, the owner of the Hotel Iroquois at the time. The French menu consisted of twenty-one items with wine listed by the course.

Dissecting The Menu: What’s On The Plate?

Martini– Martini’s were first seen on menu’s around 1901 but got very popular from the 1940’s to the 1970’s. Now, Martinis are seen on drink menu’s at most restaurants.

Tortue Claire Au Xeres– Turtle soup with Sherry, a wine originated in a town called Xeres in southern Spain. Cooking Sherry has a salt additive for a longer shelf life, which is not suitable for drinking. It is unclear here which form of Sherry is being used. This dish was first seen on the Norman E. Mack menu in 1908, but later appeared on other menus’ in the 1950’s and 1960’s. No menu sightings after the 1960’s (Sherry).

Filet De King Fish Saute, Meuniere– This is a french preparation for fish, which refers to the fish being dusted with flour before cooking. The phrase translates to “in the style of the millers wife,” which could mean anything. “The fish is sautéed in clarified butter until it’s crisped and golden, and then it’s finished with a bit of brown butter, as well as lemon and parsley” (Fine Cooking Issue 44). This dish also included apples, hollandaise sauce and cucumber.

Canard Canvasback Rotis– Canvasback Duck. “Wild celery in the canvasback’s diet imparts a unique flavor, one that apparently sets it apart from other ducks. Mark Twain listed canvasback as one of the quintessential American foods he missed while traveling in Europe.  Waterfowl and wild game was often seen at the finest city restaurants” (Epic Duck: The Story of the Canvasback).

Ris De Veau Sous Cloche, Lilly– Sweetbread under glass. Meaning, the sweetbread is served on a place covered by a glass dome. Sweetbreads are glands, the thymus and/or the pancreas (What Are Sweetbreads).

I decided that I was going to try the french Sole Meuniere cooking preparation for fish. I had never cooked fish before, so frying a fish dusted in four was a bit out of my comfort zone. Recipie is from www.finecooking.com.

I got all of my ingredients together. Fish, lemon, flour, salt, unsalted butter, pepper, parsley, and vegetable oil. I cleaned the fish and prepared for flour dusting. First, I sprinkled both sides of the fish with a little bit of salt and pepper, and laid the fish in the flour dish. I then flipped the fish over, making sure both sides were lightly dusted with flour. I gathered my parsley and lemon and finely chopped the parsley for the sauce. After the parsley was chopped, I added it to a saucepan with 1/4 cup of clarified butter, 1 tablespoon of lemon juice and cooked until golden for about two minutes. I added 2 tablespoons of vegetable oil, heated the oil to a simmer, and then added two tablespoons of clarified butter. When any foam disappeared, I dropped the fish in and cooked for about three minutes until golden brown on the bottom.

When the bottom was golden, I flipped the fish and repeated for the opposite side. When both sides were golden, I checked t make sure the inside of the fish was cooked, and then placed it on a plate.

Finally, I poured the sauce over the fish, garnished the plate with parsley, added some lemon slices, and wa-lah! My Sole Meuniere styled fish was complete. Yum! Research of the menu items gave great insight into the way restaurants prepared “fancy” meals for credible officials. This still happens today, as we see it in restaurants around the world. All in all, it seems like a bunch of fancy ways do describe something that is rather simple. In a diner’s mind, if it’s written in French, it must be good. I get that the goal is to impress people, and in most cases this kind of technique still works.

The real skill lies in the kitchen. Anything can taste good, but to make your dish unique you have to have mastered the process on how to correctly prepare, cook, and present it. I got to experience this, as I tried to mimic the Sole Meuniere preparation for fish as seen on the menu, and let me just say that I am in no way a skilled professional. Nevertheless, it was great to actually try something I never would have before.

My attempt to re-create a fish dish on this 1908 menu pushed me outside of my comfort zone in terms of cooking and culinary creativity, which actually inspired me to try new things in the kitchen. I hope to be able to master a cooking technique one day, but it’s going to take a lot of practice.