Christmas Eve in the Loney household has always been a sight to behold. Hundreds of string lights line the roof, twinkling against the white winter snow. Inside, my father’s pumpkin rolls waiting to be cut, the Christmas ham cooking in the oven, and heaps of sweets in brightly colored bowls set about the room. On the counter beside the vegetable tray sits a huge bowl full of neon green punch. Does that sound gross? Well, it kind of is; in that punch bowl is Great-Grandma Armstrong’s “Slush Punch.” The recipe has been in the Loney family for about 60 years now, beginning when my Great-Great Aunt first got the recipe from one of the cooks at Lubbock Christian University in Texas. I imagine that the cooks used the recipe because it supposedly has 50 servings per batch, perfect for serving a large group of college students. My Grandmother told me that she doesn’t remember the exact time her mother got the recipe, but that it’s been around since she was very young. Below I have an image of the recipe as it is written in a family cookbook.

This punch is called “Slush Punch” because it’s frozen and has a slushy texture, but I think it would more accurately be described as a “Jell-o Punch” because of the lime Jell-o used in the recipe. When I first asked for the recipe and found that it calls for 3 boxes of Jell-o, I was shocked. I don’t particularly care for  the texture of Jell-o, but the punch always tasted good to me. The recipe also calls for Minute Maid canned frozen lemonade and orange juice. That part I could have guessed, since the punch is very citrus-y. On top of all of the sugar in the lime Jell-o and Minute Maid, it calls for one cup of sugar. After freezing, you add ginger ale to make the mixture more of a slush than a popsicle, and then serve it to your guests.

I attempted to recreate this recipe rather recently for a party with a few minor changes. Well, really just one change…I’m a college student throwing a party, so of course I put rum in it. Everything was going so well–I mixed in all of the ingredients and it tasted alright, but I was excited to see how it was after I froze it. My fatal mistake came when I did not also chill the alcohol and ginger ale. Once I put the rum in, the mixture totally melted. You can probably imagine how disgusting it was when it wasn’t frozen, but just in case you can’t–there were bits of pulp from the orange juice floating around in the thick liquid, and the whole thing was sickly sweet. It had a similar consistency to red wine, minus the tannins and about 1000 times your daily recommended sugar intake. If you ever decide to make this recipe, I would advise you to cut down on the sugar, and if you do include alcohol, make sure it’s chilled so your slush punch can actually be slushy.

Alright, onto the research  part of this article. I looked into other recipes from around the same time in Texas and actually got a lot of hits. The recipe below is from the Plano Star Courier in 1974, quite a few years after my Great Grandma got her recipe, but similar enough that I thought I would include it.1 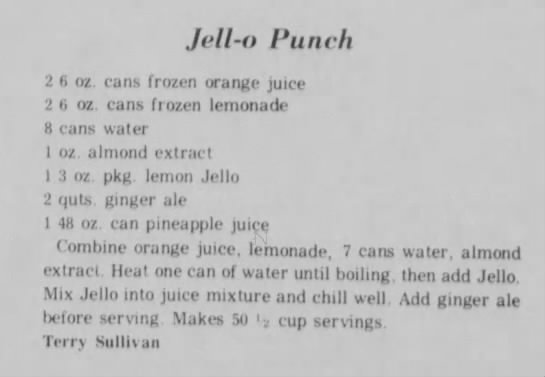 This recipe uses Lemon Jell-o instead, but almost everything else is the same, right down to the serving size. The recipe was included in an article with other recipes in Methodist Women Host Tasting Tea. There were also other recipes published in various newspapers such as The Courier-Gazette by “Mrs. Robert Furr.” 2 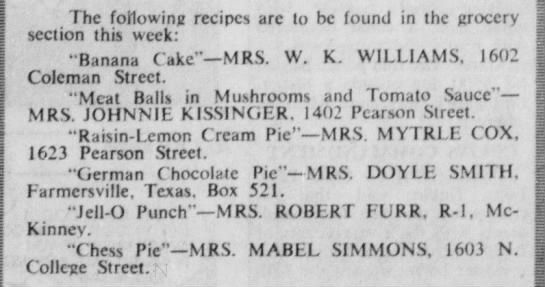 Jell-o was first invented in 1897 by Pearle Wait. The product was revolutionary, making once inaccessible desserts readily available to the average consumer. Prior to the invention of the Jell-o brand, gelatin desserts were a mark of wealth and class. Wait cut down on preparation time significantly, adding flavors to create a simple dessert that anyone could make. He sold the company to Genesee in 1899, where Orator Woodward, the owner, started making investments in advertising campaigns.3 According to Meyersohn, “Early Jell-O advertising depicted women as inept, needing the help of a simple recipe like Jell-O.” The company had everything going for it’s advertising–it was seen as a glamorous dessert, it was quick, and it was inexpensive to purchase. 4 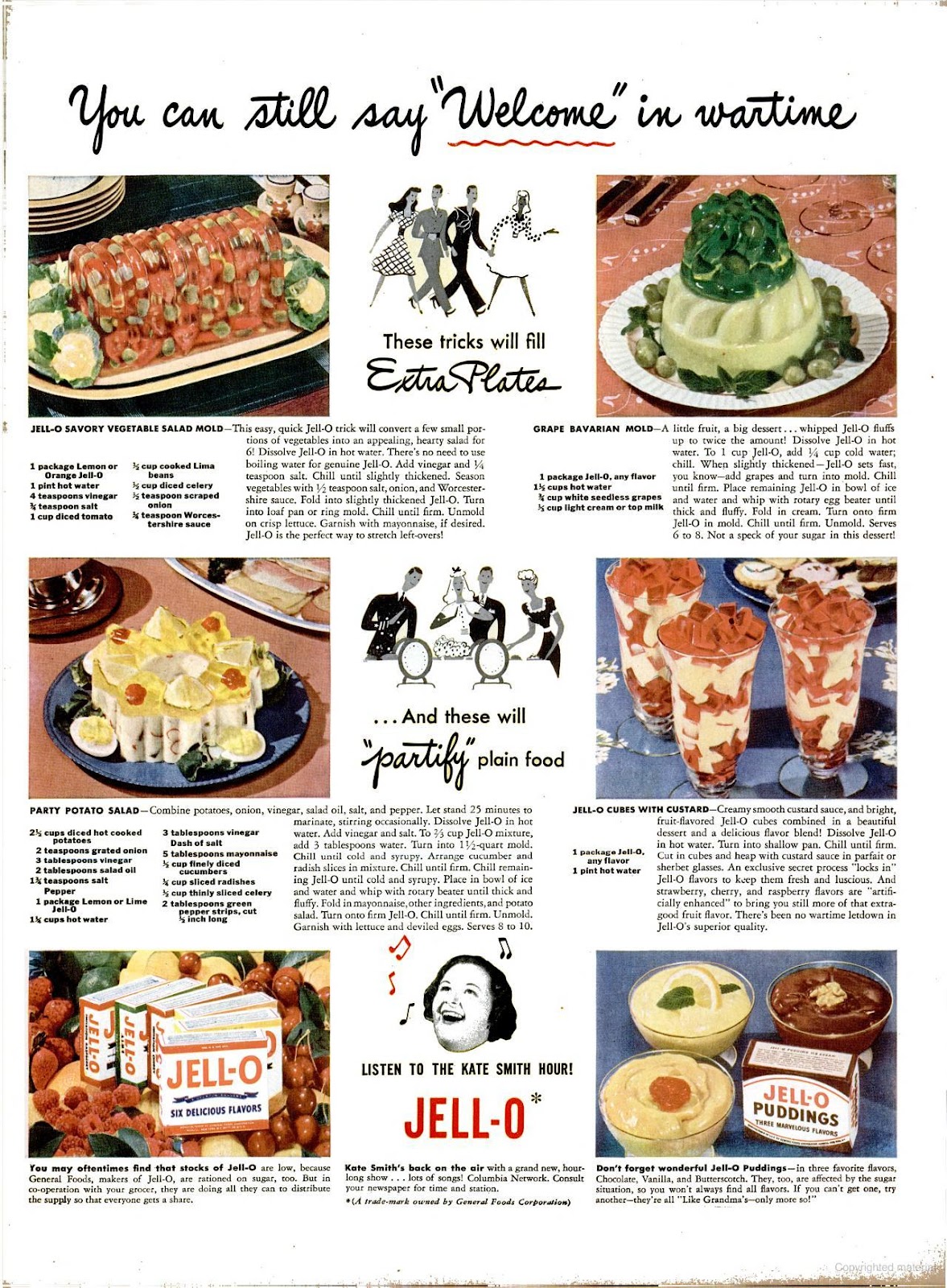 In 1925 Genesee sold Jell-O to Postum Cereal Company, an early iteration of the company we know today as Kraft Heinz. During the Great Depression, Jell-O became one of the easiest rations to get ahold of because of how versatile and inexpensive it was. Women that were at home during the war were encouraged to use Jell-O in their meals to continue to have a welcoming dinner experience, even in wartime (see image above).5 In addition to being a fun dessert for people to serve, it was used to supplement rations and make leftovers stretch into more servings.

My grandmother was born just after World War Two ended, and it very much affected what she ate and what was available in her household. Jell-O really took root in the United States during this time, becoming a staple in American households. Another large part of American food culture at the time was canned food. Canning made goods last much longer than they normally would, and it was easy to supplement meals and drinks.

Minute Maid canned frozen concentrate became very popular a few years after Jell-O, first becoming available in 1946, under the name Minute Maid but sold by the company “Vacuum Foods Corporation.” In 1945, the United States Army ordered lots of powdered orange juice, but the war ended before it was shipped. Instead of leaving the original juice powdered, the company decided to make it a frozen concentrate instead. The product was then commercialized for consumers, but it was a direct result of World War II. In 1949 Vacuum Foods Corporation was officially changed to Minute Maid.6 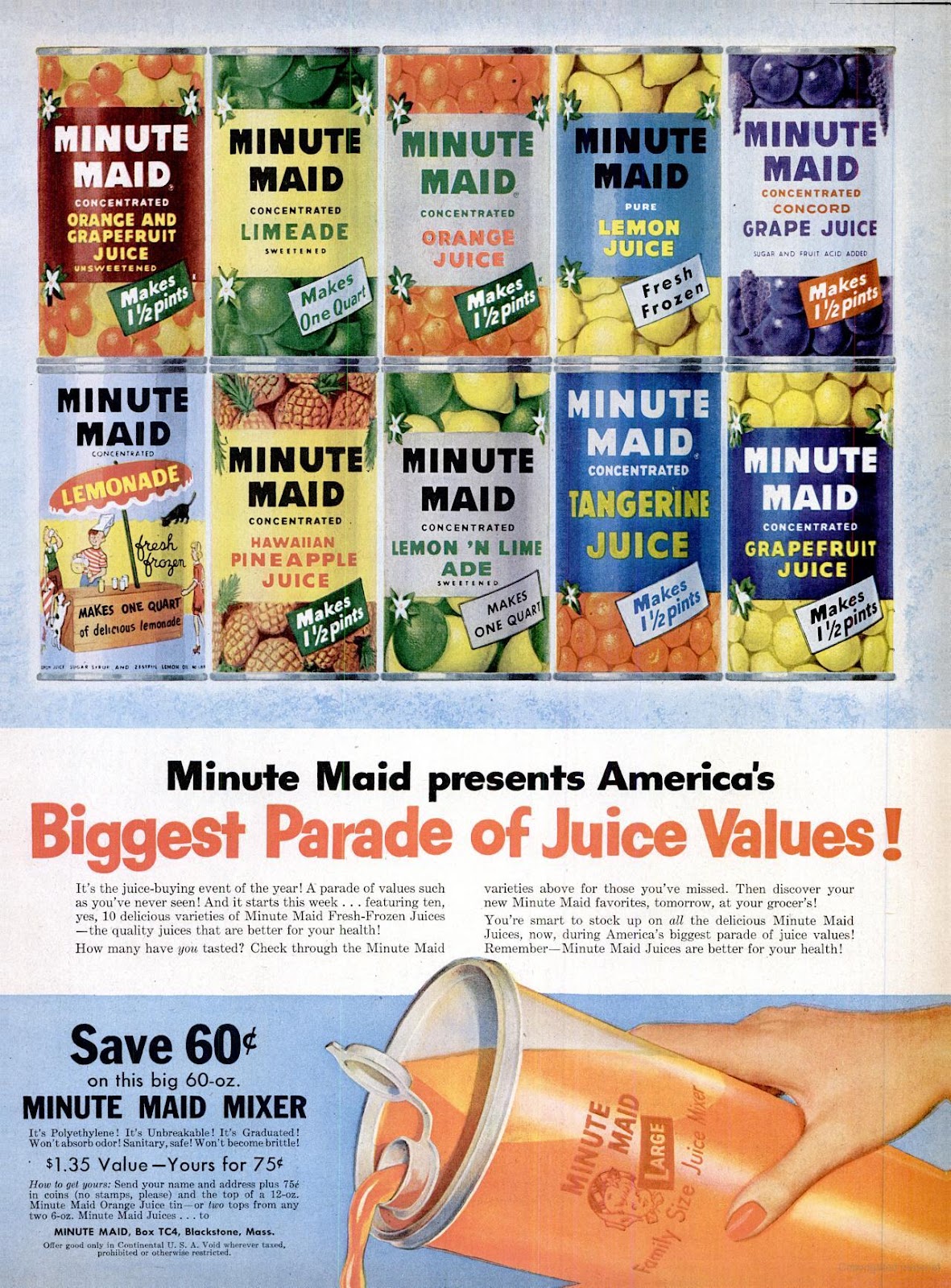 In 1956 a can of Minute Maid was advertised to consumers in Life Magazine for 75 cents, which would be about $7.80 today with inflation (Image Above).7 They advertised 10 flavors, all citrus except for the grape flavor.8 A few years prior to this advertisement, Bing Crosby was the face of Minute Maid, launching the brand into popularity.9

Canada Dry Ginger Ale was created just a few years after Jell-O.10 In 1904, John J. McLaughlin adapted more “syrupy” recipes of ginger ale into the lighter version that we know today. According to Canada Dry’s website, ginger ale was considered the “champagne of soda,” and was used heavily during the prohibition era to mask the harsh taste of some liquors.11 Ginger ale was also considered to have curative properties for stomach issues, however this hasn’t really been proven in any scientific way.12 In any case, I’m sure my great-grandmother was using Canada Dry in her slush punch back in the 1960’s.

The origins of the term “punch” are somewhat muddled and unreliable. According to Simon Difford, some believe that the term punch originated “from the hindi word for five, a reference to the traditional number of ingredients.” David Wondrich, a cocktail historian and mixologist,  believes that it may have originated from a 500 liter style of cask called a “Puncheon,” which seems to be more likely. The first punch recipe on record, according to Wondrich, was in 1638 by Johan Albert de Mandelslo in Surat, India.13 Sailors brought these recipes back with them from India, which ultimately saved many of them from scurvy, as most punches contained some form of citrus.

The base of these punches was “Arrack,” a spirit from the east Indies, specifically Batavia (present day Jakarta). Difford and Sutcliffe do clarify that while it was indeed arrack that sailors brought back home with them, it is more of “a Hindi catch-all term for distilled spirits.” Batavia arrack can be distinguished, however, because it is generally distilled from molasses.14

Punch became quite popular among the English aristocracy after sailors brought it with them in the 17th century. Difford also claims it was said that the founding fathers drank “76 bowls [of punch] at the celebration following the signing of the declaration of independence.” In the early 19th century, alcoholic punch began to fall out of style, people generally preferring to order individual cocktails instead.15

I’ve found it fascinating to look through the origins of this family recipe and all of the ingredients. While most of the ingredients originated at the beginning of the 20th century, the idea of punch itself has been around for more than 300 years. It’s amazing how something can be in your family for generations and you don’t really know where it came from.