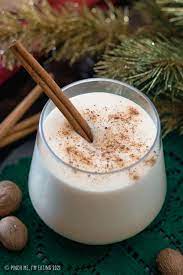 Eggnog has become the holiday staple of father’s nationwide, nothing completes a perfect holiday photo like a cold glass of eggnog spiked with rum, brandy, or whiskey. A stroll through the supermarket shows the refrigerated section lined with “eggnog”, “almond nog”, and “eggnot”. I’ve never been a fan of egg nog, I prefer to eat my eggs rather than drink them (call me crazy) but I seem to be in the minority as eggnog is rumored to come from medieval England, making the creamy holiday beverage somewhere around 700 years old. For it to have survived longer than the Roman Empire, someone has to be drinking it, right? It turns out, a lot of people love egg nog, including, some say, George Washington. But here’s the catch, if egg nog has been around since the 14th century, were people really risking their lives by drinking raw, unpasteurized eggs?

Louis Pasteur invented pasteurization in 1862 when he heated raw milk for an extended period of time effectively killing microorganisms in milk that caused deadly diseases. Salmonella was the most popular bacteria to be transmitted by milk, salmonella poisoning causes a nasty slew of symptoms including vomiting, cramping, diarrhea, and in the worst cases, death. Pasteurization may have been invented in 1862, but it wasn’t common practice in the United States until around the 1920’s. Today, it’s illegal for farmers to sell unpasteurized eggs and milk as the health risks are far too great. The only way to get your hands on raw dairy products is to “know a guy” or remove the middle man of a grocery store and find a farmer willing to provide you with the goods needed for old-fashioned egg nog.

While “George Washington’s eggnog” is a popular recipe, there’s no actual proof of a recipe for eggnog in any historical writings from Mount Vernon, it’s believed that the eggnog we know today probably came from the 19th century. However, Washington was known to serve a drink containing cherries, whiskey, and eggs for the holidays, which is likely where people get the idea for his eggnog from. This recipe comes from “How to Mix Drinks or The Bon Vivants Companion”, a book of cocktail recipes mostly of the punch variety from 1862. These drinks were likely served at social gatherings, each recipe varies for how many it serves, some recipes end up being 2 servings, but this one is for a party of 40. Being published in 1862, this book came out right in the middle of Civil War so I imagine readers were in need of a stiff drink, this recipe delivers that perfectly.

The instructions are fairly straightforward, separate eggs, beat the yolks and the whites, add everything together with a nice egg white foam on top, it’s not too different from a craft cocktail today. Serve in a large punch bowl with (more) colored sugar on top, sounds like a party to me.

But eating raw eggs in 2022 is still controversial, even with all the technological advancements of the day, how were people able to drink eggnog and survive to the new year? A little bit of luck and a lot of booze. The higher proof an alcohol is and the longer it sits with raw eggs and milk, the more bacteria the alcohol is able to kill. The ideal age time is no less than three weeks, which would have been possible thanks to natures fridge; winter. So rum, which is famous for being able to survive months at sea without spoiling because of its high “proof” and brandy which is distilled alcohol (essentially alchoholic alcohol) would be strong enough to destroy harmful bacteria. It’s the same process as acid in citrus cooking fish to make ceviche or dousing a freshly skinned knee in isopropyl alcohol. It may burn, but that means its working.

For a party of 40, and with ingredients like these, this recipe wasn’t for people who were pinching pennies. Because of the civil war, most of the men were out fighting leaving women to their own devices. Liquor was typically a mans domain, especially considering that temperance was in full swing and alcohol was a controversial enough topic. This concotion was likely a holiday treat for the upper middle class and served at parties which were often for the wealthy at a time like this.

Arumugam, Nadia. “Why Aged Eggnog Made with Raw Eggs Is Safer than Drinking It Fresh.” Forbes, Forbes Magazine, 20 Dec. 2013, https://www.forbes.com/sites/nadiaarumugam/2013/12/20/why-aged-eggnog-made-with-raw-eggs-is-safer-than-drinking-it-fresh/?sh=5e9c7b6e2e16.&nbsp;

Thomas, Jerry. How to Mix Drinks, Or The Bon-Vivant’s Companion: To Which Is Appended a Manual for the Manufacture of Cordials,Liquors,Fancy Syrups, &c.,&c. Dick&Fitzgerald, 1862.