Despite masks being a controversial piece at this time; in the 1946 Mardi Gras Season, they were a celebrated element of the holiday.  Mardi Gras masks do not match what we think of as masks today.  These masks covered anywhere from the eyes to the whole face of the person wearing them.  They are often matching to the rest of a float costume or masquerade ensemble.  These masks are (elaborately decorated with feathers, beads, and shimmers of purple and gold) are indicative of the spirit of New Orleans and the Mardi Gras holiday.

While parades, king cakes, and beads are all essential parts of Mardi Gras, one of the most iconic symbols of the holiday is a Mardi Gras Mask. Mardi Gras specific masks, such as the two full faces intertwined by their ribbons; one expressing joy whose the other express agony, are a symbol that many outside of the city can easily correlate to the holiday.    While this symbolism is very clear to outsiders, it runs deeper for the non-tourist maskers of New Orleans Carnival.  During Carnival, the mask allows maskers to hide their identity and display themselves as whoever, or whatever they desire.  Carnival goers are able to design elaborate masks and costumes to bring their alter egos to life.  Some of the main contributors to the larger than life masks and costumes are those atop Carnival floats.  Float riding maskers spend weeks or even months perfecting their story through the arrangements of colors, decorations, and symbols amongst their ensembles.  Each individual person contributes a piece to the larger story that rolls through the streets on Mardi Gras day for thousands to enjoy. 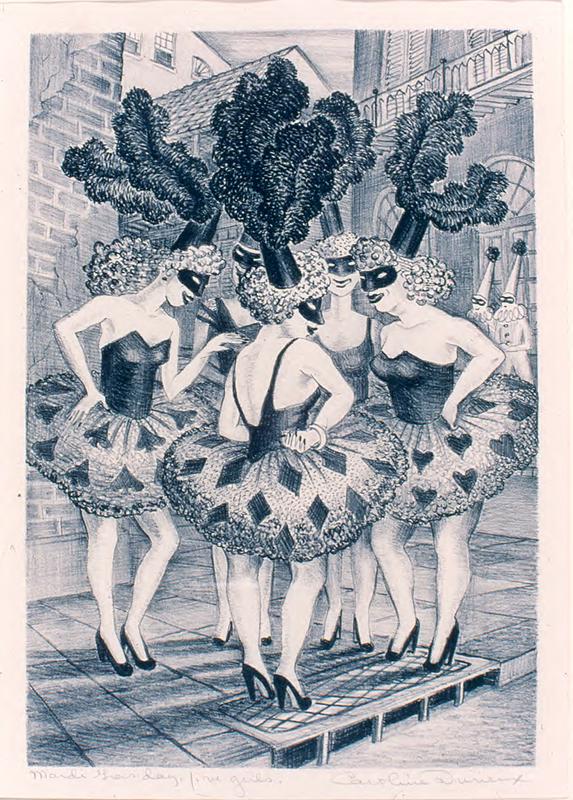 Above is an example of a 1946 costume and mask duo.  A group of girls in similar matching feathered hats, black masks, tops, and heels as well as large skirts containing different symbols on playing cards. In this photo, we can see an example of matching costumes and the creative lengths people will go in telling their Mardi Gras story.  Also seen nearby is a group of masked clowns, showing how different the inspirations people took for their costumes were. 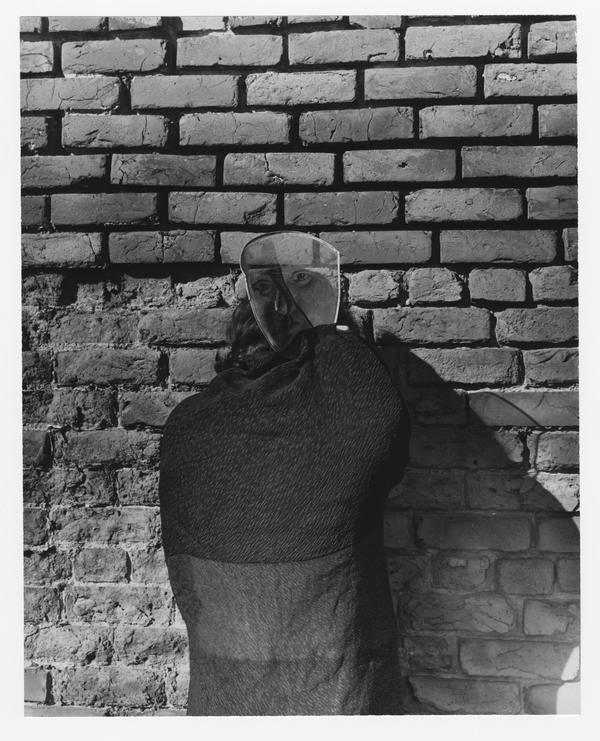 “Emergence of the Nightmare Selves, Number One. The Emergent Other Self. Our Masks Betray Us Self.” Louisiana Digital Library.

Though masks technically hide the wearer’s identity, it can also be argued that they reveal the wearer’s true identity.  Masks were frequently used to show who one hopes to be or a vibrant depiction of a group they identify as.  As we can see from this photo, masks are very representative of the part of ones self that is not shown.  A great example of this is the Native American Krewes.  These krewes spent months perfecting extravagant costumes that beautifully display their tribes’ culture and traditions.  Matching masks were also used to unify groups who paraded together atop a parade float or in the crowd.

Mardi Gras was a day where all social etiquette rules were briefly tossed aside and people were able to express themselves however they choose.  People were able to dress in any gender or style of clothing they chose with relatively little judgment.  People took this opportunity to express their sexuality in ways they could not normally in everyday life.  This provided a sense of liberation to groups such as women and homosexual men who, for most of the year, had to adhere to what was socially acceptable or risk facing a backlash.  Masks were not only used by flamboyant street goers during parades but also by the elites of society in their selective Mardi Gras balls.  Masquerade balls were and still are, a frequent of carnival and an important part of the quiet New Orleans hierarchy.  Masks were used to provide an aura of mystery as well as distinguish the court.  Masks highlighted the kings and queens of Mardi Gras for the year.  Whilst in the mask members of the court were no longer people, but gods amongst men.

Through this all, it is shown that masks are deeply personal.  A Mardi Gras mask is not confined to any specific set of rules, colors, shapes, or accessories; it is simply confined to one’s own imagination and boldness.  At this time people created masks of all sorts, from simple, elegant masks, to masks depicting animals, to masks used to convey a message.  One documented mask series from 1946 was created and sported by Mr. Eddie Dryer.  His mask creation was the face of a pig draped in pearls and other extravagancies which can be interpreted in many ways such as as an inner nastiness that will always show through no matter how elegantly it is presented.  Installations like this one showed the artist nature of the city that bred them.

The Mardi Gras mask has rightfully earned its spot as one of the most notable parts of the holiday.  These simple creations add such a unique and exciting element to the holiday and celebration.  Masks and costumes give many the opportunity to freely express themselves and transform into another being while creating art that depicts the beautiful soul of New Orleans.