The Sociétés des concerts du Conservatoire regularly played in the French Opera House before World War I,  an era when they were seen as one of the best orchestras in the world.  This longstanding engagement not only reflected the strong ties between French heritage and culture and New Orleans  but also the city’s standing as an international destination for music. The Conservatoire’s concerts stopped during World War I but resumed in 1918 with their 52-city tour of the United States to raise money for the French War Work Fund and to also celebrate Allied victory in the war.

The symphony was staying at the famous Grunewald Hotel which was in the French Quarter near the French Opera House.  They met the mayor of New Orleans, Martin Behrman, at Gallier Hall, built by the architect James Gallier, which used to be the former city hall.  This showed how important hosting this french opera was to New Orleans and how they were going to celebrate winning the war.

The opera performed on November 18 in front of a sold out crowd at the famous French Opera House’s grand reopening.  Built in 1859 at the corner of Toulouse and Bourbon Street also by the architect James Gallier, the opera house served as a place where many individuals could watch and listen to many famous symphonies such as Sigurd and plays like Carmen.  The symphony composed pieces like après-midi d’un faune by Debussy and Roman Carnival by Berlioz.

The audience loved the pieces performed and was even described as “the finest assembly of instrumentalists that have ever been heard in New Orleans”  and even allowing for another showing of the symphony two days later to allow for those who could not get a seat to hear them play. This marked one of the last high moments in the French Opera House as nearly a year later on December 4th 1919, the opera house caught fire and burned to the ground leaving behind a rich history and legacy that many New Orleanians remember and cherish. 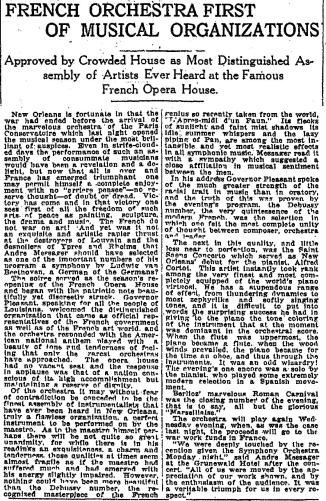