In 1915 the vast American West had finally been unlocked and was easily accessible by train.  The Great Northern Railway took passengers from Minneapolis to Seattle and relied on tourism to fill the traincars1.  The Great Northern Railway was partially responsible for a large amount of development including national parks and ranchlands due to their heavy sway in legislation, and their desire to create “The Playground of the Northwest”1.  The notion of having all the world available to oneself was a huge strategy to how the railroad advertised itself; it was the railways the allowed for the transportation of all the food to urban centers.  The menu of the railway inspired ideas of the great American continent through a selection that highlighted the natural resources of the land.  The menu had a large variety of both simple and complex dishes.  Pork chops and liver are accompanied by Scotch Woodcock and Tripe Creole, Caviar Canapes and celery, Bellevue Consommé, Chicken Okra Soup, and Green Turtle Soup.  The menu also includes a large section on seafood including Fish from all over America including Lobster Newburg, Cod, Lake Trout, and Brook Trout. 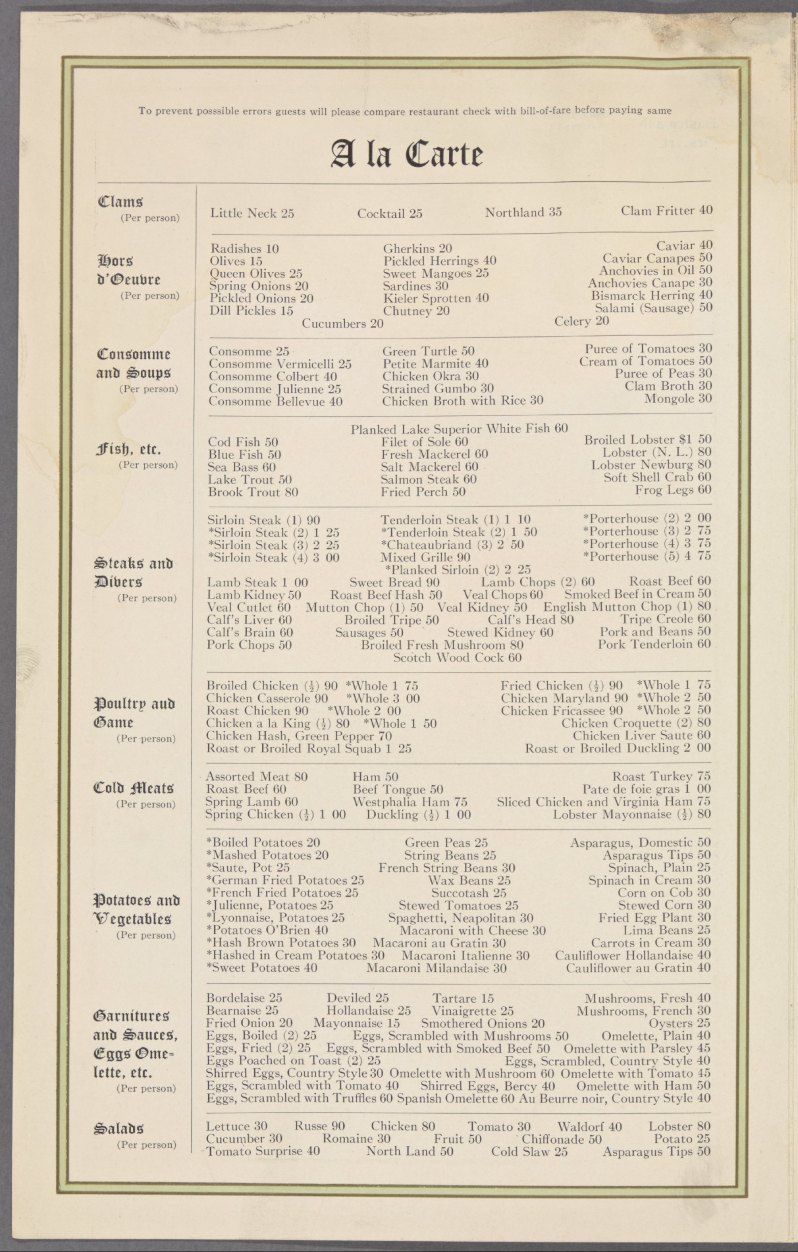 The downside to harvesting food from all over the country is that the environments that had been in balance for thousands of years were suddenly altered.   Raising stock meant less land resources for wild animals, non-native species were introduced both intentionally and unintentionally, animals were hunted to extinction, and the ever-growing human presence in the land polluted and repurposed the land making it impossible for certain species to thrive.  One natural element that underwent immense change during American expansion was water.  Water takes a long journey from rain to ocean where it accumulates particles, and as soon as America expanded the content of the water changed.  The connection of a waterbody to its watershed means the health of the body of water is a good indicator of the health of the rest of the ecosystem.  The deterioration of water quality, overfishing, and introduction of non-native species, in expanding America drove many fish, like the Brook Trout native to the American East, from their habitat.  Examining data from menus archived in the New York Library’s menu database reveals clues about the overfishing of the brook trout.  Although brook trout begin showing up on menus in 1892, the biggest spike in the menu offerings was in 1911.  The sudden decline in popularity is evidence that the population had been over fished and was dwindling.

Today, Brook trout have been driven from 33% of their original habitat, because Brook Trout require a specific environment to thrive based on several factors2.  One factor the trout are dependent upon is oxygen.  When the water temperature rises, dissolved oxygen is released into the atmosphere2.  When settlers cleared land, or their grazers cleared it, waterways would lose cover and with direct sunlight began to warm2.  Waste from humans and livestock and other pollutants were washed into streams, altering sediment, nitrate, metal, alkaline, and pH levels in the water for which Brook Trout have a low tolerance2.  Livestock overgrazing, creation of roads and railways, and irrigation also changed the character of streams to have different shapes and flow rates, changing the sedimentation of the stream.  The Brook Trout relies on gravel bottomed flowing water to lay eggs, so when the flow rate is changed or too much sediment builds up reproduction is impossible2.  Another factor that drove away the Brook Trout was the introduction of non-native fish to their habitat.  Rainbow Trout from the Western United States and Brown Trout from Europe were introduced into American waters in the early 1900’s for recreational purposes.  Rainbow, Brown and Brook trout compete for the same food sources, mainly aquatic insects, and when Brown trout grow to a certain size their diet changes to solely eating other fish.  Eventually the Brook Trout were either replaced by Rainbow and Brown Trout or at the very least had to give up part of their stream.  Conservationists are currently working on reintroducing the brook trout to its habitat to provide the natural world with a greater authenticity and diversity, as well as a truly “American” recreational experience.

I set out on my own adventure searching for brook trout, to understand today’s fishing experience.  I headed to the Great Smoky Mountains National Park in Tennessee; part of the southern Appalachian Mountains and part of the original range of the Brook trout.   Where brook trout live now is high up where humans did not exploit the land as much and water quality remained high.  I went to one of the lowest and most easily accessible brook trout streams in the park, Cosby creek, above the historic moonshining town of Cosby.  Although much of my time was spent waiting for good fishing conditions I finally got out and realized fishing for brook trout is difficult.  I picked up on the local Tennessee technique called “high stickin’” that helps to keep the fishing line taught above the water when it plunges into white water pools.  Where I started by only seeing flashes of red fins falling off my hook in a tantalizing display I began understanding the brook trout, where they like to live, what they like to eat, and how they like to eat it.  The brook trout love where water plunges over rocks into a pool below, I believe the whitewater gives them cover, good oxygenation, and food naturally comes floating down.

It may be that Smoky Mountain brook trout are extra special, but the colors of the brook trout are exceedingly beautiful; they are made to blend in with the gravelly bottoms of streams where they live.  I learned that brook trout fishing is a strictly American tradition that has been driven out by the scale of America and its industry. Modern brook trout fishing provides pockets of culture to understand ecological and human history, and be able to choose our future to preserve what is important to Americans.