William Malcom Bunn, born January 1, 1842-September 19th,1923, was an American newspaper man and Governor of Idaho Territory. He was born in Philadelphia and lived there. He worked in a factory at age 11 until he made 14 years old and was sent to New York. There he started attending a school ran by his uncle. Bunn became politically active in 1866 serving as a delegate in Philadelphia’s Republican Convention.

In 1868 he was elected to the first consecutive term in the Pennsylvania General Assembly and in 1878 Bunn purchased the Philadelphia Sunday Transcript. In addition to his business, Bunn started to develop a social life becoming a well-known dinner speaker. He then wrote the book “Some After Dinner Speeches of William M Bunn” – More information on the book here.

The Great Depression brought hard times to the Bellevue-Stratford Hotel. The hotel gained worldwide notoriety in July 1976, when it hosted a statewide convention of the American Legion. Soon after, a pneumonia-like disease killed 29 people and sickened 182 more who had been in the hotel.

A bedroom in the Bellevue-Stratford, photographed by William H. Rau, circa 1905

The negative publicity associated with what became known as “Legionnaires’ disease” and caused occupancy at the Bellevue-Stratford to plummet to 4 percent. The hotel finally closed on November 18, 1976 but, before that time William M Bunn’s menu was produced and the items on the menu were served at this hotel. 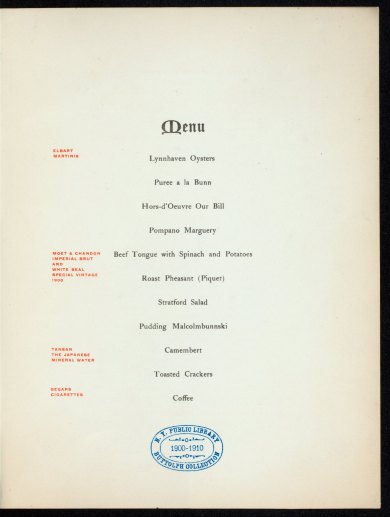 The hotel reopened on September 26, 1979, managed by Fairmont Hotels, as The Fairmont Philadelphia. The following year, Western International Hotels bought a 49-percent interest in the hotel and assumed management on November 15, 1980 and returned the hotel to its original name, Bellevue Stratford. Two months later, Western International was itself renamed Westin Hotels, and the hotel was soon renamed The Westin Bellevue Stratford and on March 7th, 1986 the hotel was closed due to room renovation failures.

Finally, the hotel moved to The Unbound Collection division of Hyatt in March 2018, and was renamed The Bellevue Hotel.