Louisiana Supreme Court Building was an authoritative power in the City of New Orleans that reflected the heritage of the city and its people through its physical appearance and the Court’s interpretation of the law during Reconstruction. The outside of the Cabildo holds a stoic pristineness that reflects on the city’s cultural pride and historical foundation. A visitor writes about the charm of the Cabildo:

“Something of the old life and the old faith must live in the creole quarter… I fancy those two massive Spanish edifices, the old Cabildo and Casa Curial, will still remain standing upon either side of the cathedral, like grim soldiery guarding a commissary of the Holy Inquisition.” {From HarpWeek} 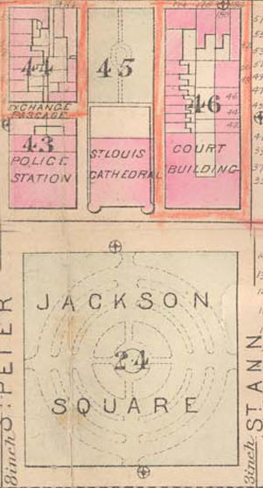 The Cabildo depicted as #43. From Robinson’s Atlas

The Cabildo’s Spanish architecture connects the building to New Orleans heritage through its emphasis on history and culture. The writer continues to talk about the people in New Orleans:

“They have an ivo-rine tint, a convalescent pallor, that contrasts oddly with the fire of their dark pupils and the lustrous blackness of their hair When the tint is darker, a Spanish swarthiness, the effect is less strange” {From HarpWeek}

Something can be said about the Cabildo’s heritage in relation to the Supreme Court cases that were held during Reconstruction. As groundbreaking cases and interpretations of the law progress the environment within America, New Orleans still maintains roots within the city while reflecting the racial changes. The Cabildo is a prominent and integrated building which directly reflects on the many issues within the city.

The case argued for immunities of the civil person for the slaughterhouse and affected the interpretation of the fourteenth amendment in other racially-centered cases. A vote looking to remove the Crescent City Live Stock Landing and Slaughter-House Company bill lost forty-two to thirty-one. The court separated the clause of citizens’ state and federal rights in a way that did not grant blacks equal protection. Moving forward, the Slaughter-House Cases effectively rendered the legal rhetoric of the fourteenth amendment as insignificant.

Plessy v. Ferguson (1891) involves segregation of black and white railway cars. One man, Adolph Plessy, sat in  whites-only car and refused to move. He was arrested and the case was brought to the Supreme Court.

The case challenged the equal protection clause of the fourteenth amendment. The case took place after the Slaughter-House Cases, which had set a precedent where the court could use the fourteenth amendment in a selective manner. The state’s segregation of railway cars gave equal but separate treatment to blacks and whites, and therefore did not violate the equal protection clause in the fourteenth amendment. The fact that Plessy was only one-eighth black added further ambiguity to the social implications of this case. Was there prejudice against all mixed race people? The next case challenges the institution of prejudice and segregation from a different perspective.

Sauvinet v. Walker (1875) involves the denial of service of a mixed-race person at the Bank Coffee-House.

Charles Sauvinet was a prominent member of society with a mixed-race heritage, and was the first colored person to become Sheriff in the Parish of New Orleans. When he was refused service at the Bank Coffeehouse because of his race, he sued for reparations. After Charles won the initial case, he brought the case to the Supreme Court and asked for harsher punishment. The ruling sets the precedent for Reconstruction through a unique interpretation of the fourteenth amendment in regards to segregation and state law. Art. 13 of the Constitution of Louisiana states:

“All persons shall enjoy equal rights and privileges upon any conveyance of a public character, and all places of business or of public resort, or for which a license is required by either state, parish, or municipal authority, shall be deemed places of a public character, and shall be open to the accommodation and patronage of all persons, without distinction or discrimination on account of race or color.” {From LA Constitution}

The Supreme Court ruled in favor of this clause and enforced the previous court ruling. In this case, the cultural and social aspects of the Cabildo mix and challenge the status quo of the city of New Orleans. The heritage represented in the Cabildo, including the Spanish heritage, reflect on the background of the city. The Slaughter-House Cases (1873), Plessy v. Ferguson (1891), and Sauvinet v. Walker (1875) change the social environment in New Orleans and the greater United States of America through their keystone interpretations of the fourteenth amendment and its interaction with state law. The Cabildo courthouse heard these cases and reflected on the State Law and cultural implications in the state in order to make their rulings, and extended the Cabildo’s cultural heritage to the nation.