The relation between the vegetarian diet and the meat eaters diet offers different nutrients that take on a deeper understanding than just the meat. To look at how this relation is different, we can look at the dishes in the cookbook, New Vegetarian Dishes.  New Vegetarian Dishes published by E. W. Mrs. Bowdich is a cookbook that not only includes vegetarian sweet like any ordinary cookbook, Mrs. Bowdich offers cookbooks that take the place of meat while it is perishable. This cookbook presents 221 recipes, and 200 of these recipes are original and have been carefully thought out and tested by the author. Many of the recipes in the cookbook are as nourishing and ordinary just as meals that are made with meat. 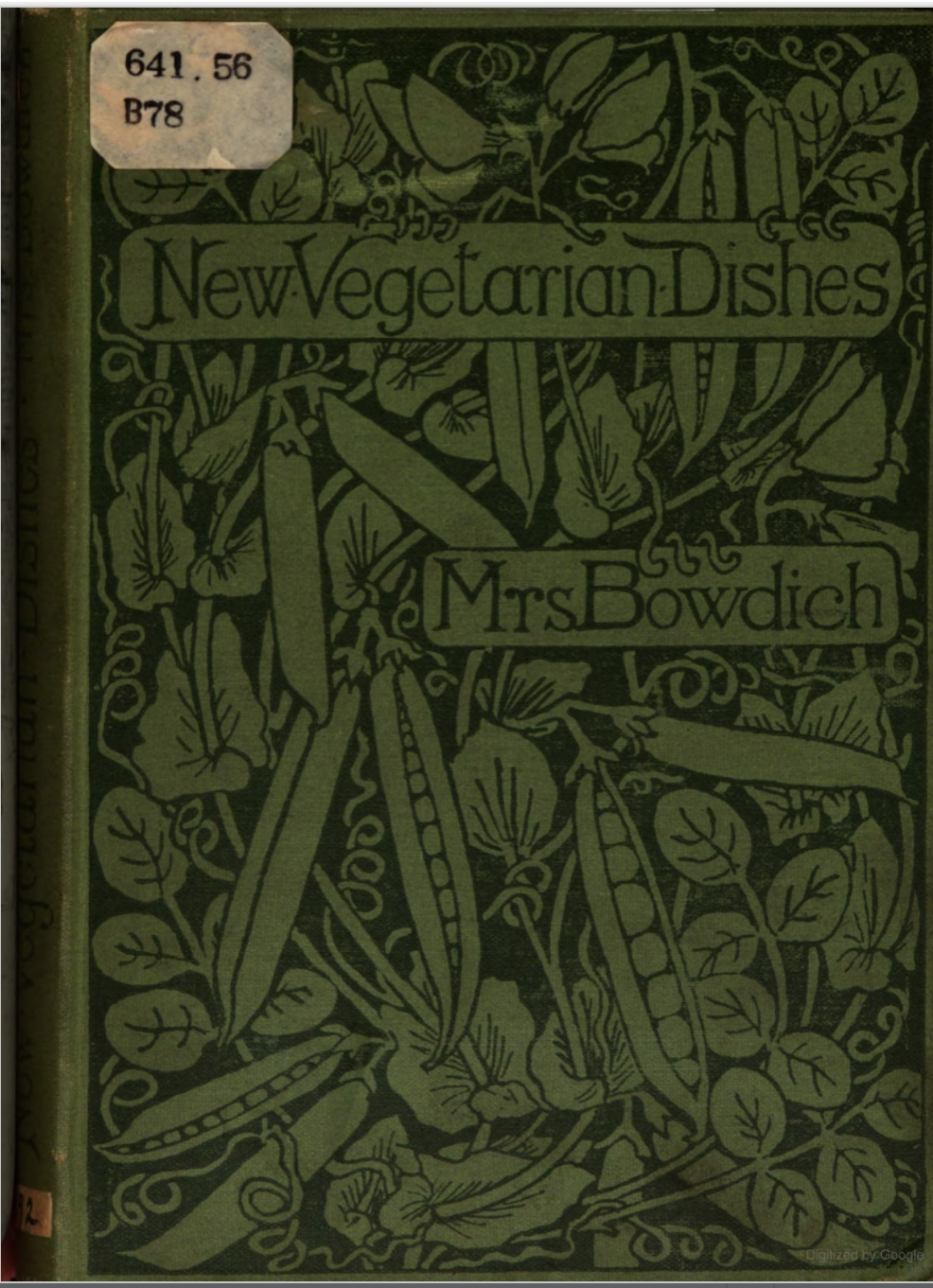 Vegetarianism was first preached by Reverend William Metcalfe (1788–1862), a pacifist and a prominent member of the Bible Christian Church, who preached vegetarianism. He and Sylvester Graham, the mentor of the Grahamites and inventor of the Graham crackers, were among the founders of the American Vegetarian Society in 1850. It wasn’t until the 1900s when vegetarianism started to be more talked about. During the late 1920s vegetarianism started to go on a rise. In the early 1920s, Los Angeles added two raw food restaurants and a Sephardic Kosher café to its list of meatless eating places.

New Vegetarian Dishes is a cookbook that was not like the rest of the vegetarian cookbooks that had vegetarian sweets that were in any ordinary cookbook. Instead it featured nourishing dishes that were made from beans, eggs, peas and a variety of grains designed to replace the ingredient of meat. Concluding that vegetarianism was a healthier diet  that reduced the risk of cardiovascular disease and obesity, the popularity of vegetarianism grew in the 1960s.

One dish we can look at that Mrs. Bowdich is made with savory sausage. The savory sausage is a dish that has no meat in it but still has a lot of nutrients that anyone can benefit from. This dish is made from a combination of eggs, vegetables and grains.

After this i will talk about the meal of savory sausages and what is in it and how to make it. I will also be adding in a few pictures talking about what is happening in the pictures, what foods are being made and the nutrients of the meal. I will add in this stuff whenever I start making the pictures and when it gets closer for the final project to be due. I will also add in a picture somewhere that shows the cookbook and the dish I will be cooking.

To start off my cooking, I first began collecting the ingredients: cabbage, eggs, bread crumbs, beetroot, mashed potatoes, pepper and salt. All the ingredients for this recipe was easily attainable except mint sauce was nowhere to be found so it was excluded from the recipe. After I bought the ingredients I went home and started to prepare them for cooking.

The next step that I took in the cooking process was to measure the ingredients. ¼ pound of cooked cabbage, ¼ of cooked mashed potatoes, 1 boiled egg, 2 slices of beetroot, 1 ounce of bread crumbs, ½ of teaspoon of salt and pepper, and 1 egg with additional bread crumbs. The main trouble was mincing the cabbage, beetroot and the boiled egg to be able to mix the ingredients together. Mince in the meaning of cooking is to finely chop the ingredients with a knife into very small pieces.

The process of cooking started with me cooking the cabbage. This was just water and cabbage into a crockpot, which was simple. Then when that was done, it came to be the mincing of the cabbage, beetroot, and boiled egg and was cut into very small pieces. I then cooked the mashed potatoes, and when that was done I mixed the minced cabbage, beetroot, boiled egg with the mashed potatoes, bread crumbs, pepper, and salt together in a bowl and mixed that well. As I was mixing the ingredients I added two teaspoons of battered egg into the mixture. This recipe is so far a pretty simple recipe that I have done something like this in the past, so it was not too hard to follow. After mixing all the ingredients together I had to make sausage links with the ingredients. Once the sausage links were made, with the leftover battered egg and bread crumbs I was to dip the sausage links into the egg and the bread crumbs. The recipe was to fry the sausage links. I gathered a pan and some oil and heated the stove to about a medium temperature. I added the sausage links and waited for both sides to turn a golden brown. Then there it was! In about 15 minutes there were vegetarian sausages! Savory sausages were made!

The savory sausage in my opinion was not as bad as it looked before I had cooked it. It was not as hard as I expected it to be, it was still kind of soft and a little mussy, maybe because of too much mashed potatoes or I had not cooked it long enough. Either way I would say it was not a bad dish and it was good enough for me to try it. The dish I have made may not be in any way of how it was actually made but the recipe I followed showed what a vegetarian dish would have looked like back in the 1900s. This recipe book is still available today in a more modern version.